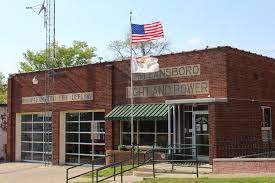 MCLEANSBORO – At Tuesday night’s McLeansboro City Council meeting, the Council accepted the resignation of Brad Cross from the Zoning Board of Appeals and Becky Cross was appointed and sworn-in to fill his position according to Mayor Chad May. Cody Vanover was also sworn-in this month to replace Steven Graves, who resigned last month. Vanover and Cross will serve five-year terms.

The City’s water tower project is also nearing completion. Mayor May says the City has been on the new tower since August and things transitioned well. All of the communications are setup to monitor the new tower and the Council approved the final payout for that at Tuesday’s meeting. The Council also approved a change order to update the date of substantial completion, but the change order did not include any additional fees to be paid. The crews will begin to drain the old tower soon and demolition will begin at the same time.

The Council also approved a contribution to the K-9 fund. Hamilton County Sheriff’s Deputy Matt Bryson was shy of his $25,000 goal by $500 as of Tuesday night. The City will make the contribution to complete this initial fundraising goal.